Skip to content
What is a Bearing? Basic study

What is a Bearing? Basic study

The current form of bearing was developed at the end of the 19th century. It was originally handmade.
Nowadays, bearings are one of the most commonly used mechanical parts because their rolling motion makes almost all movements easier and helps reduce friction.

They transmit motion, that is, they support and guide components that rotate relative to each other
They transmit power

Rolling bearings and sleeve bearings
In a bush or sliding bearing, the shaft and the bearing move in opposite directions on the sliding surface. In contrast, the two close parts of a rolling bearing-the inner ring and the outer ring-are separated by rolling elements. The friction generated by this design is much smaller than that of sleeve bearings.

Radial bearing and axial bearing
Bearings can transmit loads in the radial or axial direction (thrust), and in many cases, both radial and axial loads are transmitted.

Both designs can provide ball bearings or roller bearings. The choice of bearing design depends on the application in question. 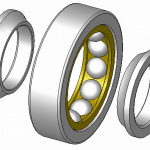 Inner ring/outer ring
The inner and outer rings are usually made of special high-purity chromium alloy steel. This material has the necessary hardness and purity-both important factors for high load ratings and long service life.

The raceway is hardened, ground and ground.

Special materials such as ceramics and plastics are also used. Although plastics cannot withstand extremely high temperatures, they are much lighter than steel. This makes them invaluable in industries where every gram is important (such as the automotive industry).

Scroll element
The rolling elements can be balls, rollers, cones, balls or needles. They are usually made of special high-purity chromium alloy steel. Special materials such as ceramics and plastics are also used.
The rolling elements roll on the specially designed ring or disk raceway, and are kept separate and guided by the cage.

Bearings are carefully designed and precision-manufactured components that enable the machine to move at extremely high speeds and easily and efficiently withstand huge loads.

Bearings must be able to provide high accuracy, reliability and durability, and be able to rotate at high speed with minimal noise and vibration.

If something twists, turns, or moves, it may have bearings in it.

There are many different bearing types, and each type has special characteristics suitable for specific applications. The following are the four most common bearing types:

Commonly found in applications such as fans, roller blades, wheel bearings, and under the hood of automobiles. 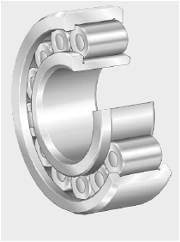 The rolling function is provided by a certain type of cylinder. It can also be called a needle bearing (the length is much larger than the diameter)